[The events of Tuesday in Kamikatsu]

After a pretty traditional Japanese breakfast of pan grilled salmon, rice, tea and pickled vegetables, we boarded the bus for the ride up to Nakamura-san’s.  To say the road is narrow is an understatement, and the bus threaded its way up the mountain with care.  At one point, the driver and our escort hopped out to cut off a small tree branch so we could pass. Nakamura’s house is a restored barn, with a mud hearth in the kitchen- cast iron tea kettle at the ready, beautifully organized spices on the shelves, a downstairs workshop and an upstairs tatami room where you open the shoji onto a view over mountain and valley that captures heart and soul.  His garden and small citrus grove provide much of his food.  There is no phone, no internet, no car.  Communication is through the postal mail and a small radio, which he said he got after a bad storm caught him unaware many years ago. He is an artisan, who over the next two days would teach us how to bind a traditional Japanese book, as well as talk to our students about the ins and outs of living an intentionally simple life in a first-world country.

For lunch, we took a side trip to a traditional charcoal maker, who turns bamboo (and other organic plant matter, such as lotus roots and chestnuts) into artful charcoal for use in tea ceremonies. The charcoal makes a characteristic hissing noise when burned, reminiscent of the sound of wind whistling through pines.

We ate pizza (!) cooked in a wood burning oven and small river fish skewered on sticks, sprinkled liberally with salt and grilled upright over a charcoal fire.  You eat them right off the stick, like corn on the cob.

We returned to Nakamura’s to continue our work on the books, heading back to Yamo no Gakko where we were staying in time for dinner and a short discussion of the trip to date.

We slept to the sound of the river and the rain falling, delightful to listen to , even if it meant our clothes would be slow in drying! We drove back to Osaka from Kamikatsu, with a stop in Tokushima for lunch and to run a couple of last minute errands. After the quiet of Kamikatsu, particularly of Nakamura’s hermitage, many of us found even Tokushima to be wildly overwhelming. In the spring, I remember finding Tokyo to be tough going after Koya and Kamikatsu, and how grateful I was for lunch in a pocket park on top of a department store.

We saw the famous whirlpool in the Naruta straits, it sits almost directly under the bridge. The last part of the drive was on an elevated highway along the edge of the water, though the ports. We swooped up and over more than a dozen elegant bridges. Each different than the rest, some bright red, like the gates into the temples, others looking like they had been beamed in from Gene Roddenberry’s future, spare, ultramodern spans of a grey so pale they were nearly white. It felt like we were flying in from one world, to land in another.

We tucked the last few things into our bags, then gathered in the lobby for the shuttle to Kansai airport. As I write this we are at 37000 feet, above Canada, three hours from landing and maybe 7 hours from home. Swooping back to our world… 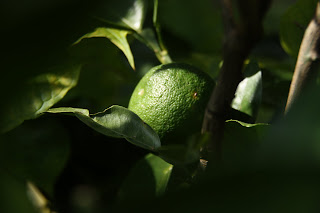 I am writing this overlooking the gorge at Nakamura-san’s, the drop just below my feet is about 40 feet down to a small terrace, once planted with rice, but now fallow. We spent the morning picking small limes (sudachi) at two farms above Kamikatsu. They grow three kinds of citrus at Bondo, which is a certified organic farm, along with the tea that we have been drinking at dinner, awabancha. The citrus has thorns, huge spiders live in the grove, and finding the green limes amid the green leaves requires some focus. The second grove we picked at belonged to a neighbor, who has just moved back here from the city to help his elderly parents.

We gleaned the trees in the first grove, checking for what had been missed in the first picking. I thought of the number of times I had asked students what they had gleaned from a reading, without any real concept of how painstaking that is, or how much you might have to search to find a bit of fruit.

So many of the rules of life for contemplatives, drawing on Benedict’s early model, specify a time for physical work in addition to the work of contemplation, and many orders do agricultural work, or make bread or jam. The rhythm and pace of the work, and the discomfort of it — the sun is hot, the lime oils are rough on the skin, the thorns prick and the small scissors are sharp enough to cut unwary fingers — are an interesting comparison to the work of meditation. Which can have its own discomforts, as well as rhythm and pace. 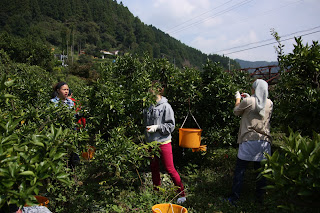 Lunch was at a small organic shop, which has local produce, including rice. The rice harvest is in progress here, we can see the sheaves of rice tied up in the fields to dry. We left with some rice (though not the 5 kg bag I was really eyeing), and lots and lots of the awabancha.

After lunch the bus dropped us at the first bridge on the way to Nakamura’s and everyone who did not have a broken foot walked the remaining distance up the mountain (a short half hours walk, but all uphill). Now we are doing the next bit of our work on binding the journals, cutting out the covers and getting ready to stitch up the spines. 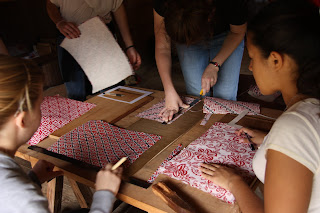