We were up at 5:45 for morning prayers here. Two priests chanted sutras while we sat. The floor was warmed from below, the rain fell softly outside. Each time one of the priests struck the bell, the black silk sleeve of his robes folded onto the floor, flowing like ink off a brush, looking like a kanji character. 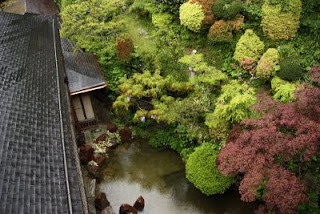 It’s been raining all day, softly earlier, now pouring. We walked up to the place where Kobo Daishi, the Buddhist saint who founded this monastic complex in the 13th century, is interred. The legend is that he is still alive, in eternal meditation. Two hundred thousand graves are in the complex, people want to be buried here so that they can ascend with Kobo Daishi. To see so many graves, so many ancient graves in particular, is astounding. 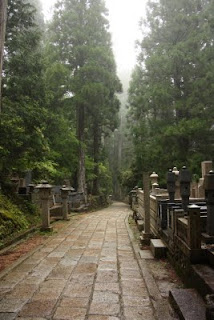 The temple is still very active, funerals are still being held, we saw at least three today. I was moved to see a young man climbing up to the shrine, solemnly carrying a silver wrapped urn full of ashes in a white sling.

We went into the temple where saffron robed priests are praying for the dead and living. The entire complex is shrouded in incense. There are hundreds of lanterns lighting the inside. A crypt underneath houses thousands upon thousands of little Jizu statues, each with the name of the deceased underneath.

We walked back to town for lunch, then met a young Buddhist priest named Hideo for some conversation about meditation. We returned with Hideo to the shrine. A monk friend of Hideo’s gave us a pinch of a spicy powder to anoint our hands with before we entered the temple, then offered us incense to burn while we meditated, and a home safety protection charm. We sat and meditated, in what felt like the middle of the market place, coins ringing as people threw them into the huge offering bin, chanting families, people pacing back and forth (walking 100 lengths of the veranda, praying). Pilgrims in peaked hats and white jackets, carrying staffs or bags of white with a small bell on them, stream past.

We had tea, make over a fire kindled from coals kept alight for a thousand years. The same fire that is used to light the candles in the shrine at the top of the hill. 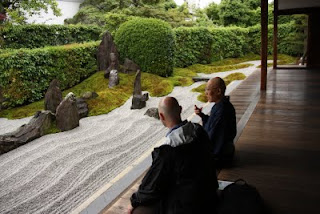 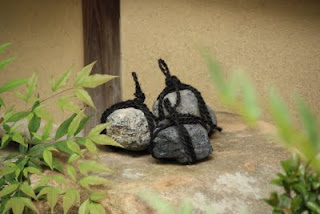 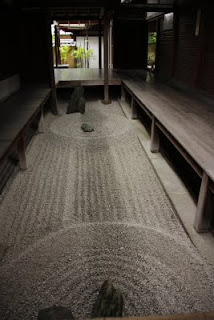 Breakfast was a quick “thick toast” with marmalade in the hallway of the inn, where I could admire the old fashioned salmon pink pay phone. We got an early start this morning to see Ryoanji temple, which is famous for its Zen rock garden. The grounds are gorgeous, but because it is a stop on the standard school tour (think Independence Hall in Philadelphia), it is generally overun with kids in school uniforms and their tour guides. We got there when there were only two busses in the parking lot, by the time we left, the lot was full. 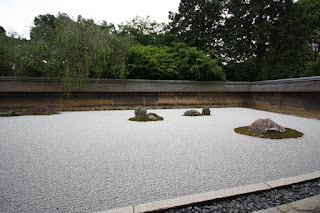 The garden was created behind the abbot’s quarters by Tokuho Zenketsu in about 1500. The garden is empty, except for 15 rocks (of which you can see only 14 at any one time), and was created (perhaps) for night time meditation. I can imagine it would be gorgeous in the moonlight. It’s surrounded by low walls, with a lone cherry tree dropping its branches over the side. One side of the abbot’s quarters is an open veranda, which is where you sit. For all that is a icon of Zen, of stillness and contemplation, the place is anything but still and quiet. 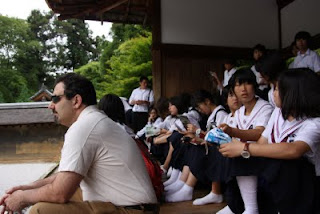 As you can see, there are lots of people looking at the garden, tour guides chattering, and recorded announcement playing (in Japanese) which, I’m told, tells how quiet this space is. Still, sitting there, tuning out the chatter, I could get some sense of what it might be like in the middle of the night to sit in this space. I suspect it would be a very still spot. 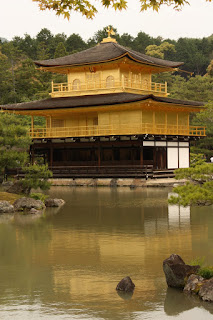 From there, we went to Rokuon-ji temple, which was, if possible, even more frenetic than Ryoanji, if you can imagine. Packed with school tours, signs everywhere forbidding group pictures (a prescription which seemed to be ignored, but you could see the logic of, as it clogged up the viewing area). Rokuon-ji’s grounds are open and lovely, but the pavilion at the edge of the lake is the draw, the top two floors are covered in gold leaf. It is spectacular. But not quiet.

Hank had written to the Saihoji temple in west Kyoto, which is more often called the Moss Temple because of its extraordinary moss gardens. The only way to get in is to request entrance ahead of time, in writing. Hank had also asked that we be allowed to see a very old tea ceremony house on the grounds (built about 400 years ago by the first disciple of the man who created the tea ceremony) for scholarly purposes. You show your letter to the man at the gate to get in, and then are offered a thin piece of paper with a sutra likely inked in (in kanji!) and shown to a room full of writing desks on the floor. For about an hour, you listen while the sutra is chanted, and copy it out with a brush and ink, then you add what you want to pray for and leave it to be burned. Then you can walk through the gardens. 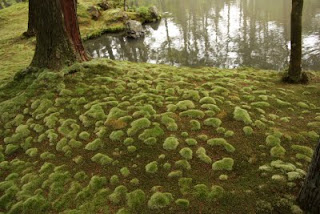 The garden are amazing, softly rolling, carpeted in moss, with occasional touches of color, as in the iris on one of the small islands in the center of the pond. Because of the limits on visitors, this is a very quiet spot (except for the cell phone ringing behind me during the sutra chanting – a truly universal experience, if there is liturgy going on, there is a cell phone going off!)

The tea house was beautiful and rustic. We could only go out onto the veranda one at a time, since the boards are original and they won’t support too much weight. I was kindly allowed to take photos, so we can show the students the interior in the fall, since we will not be able to bring them inside. 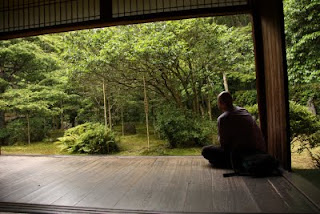 From there we went to our fourth temple of the day. (Yes, I know this is not sounding all that contemplative, but we’re getting there.) This is another 14th century space, Jizo-In, a Zen temple sacred to the deity of children. It is surrounded by stands of enormous bamboo. There was only one other visitor there and we walked up to the abbot’s quarters and sat there quietly, contemplating his garden. It was so quiet I could hear the bamboo canes (which were thirty or forty feet tall at least) clattering in the wind. It was a space soaked in stillness, more than six centuries worth, and like many other still places, draws you into that quiet. I could have sat there all night, but alas, up the hill came the elderly, nigh on ancient, caretaker to kindly turn us back out into the world. 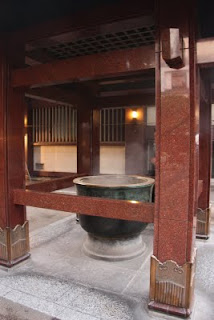 We went to Togenuki-Jizu last night, a temple in Tokyo that draws people seeking healing. The story goes that a maid, working on repairing children’s clothes, accidentally swallowed the needle. They took her to the temple, where the priest wadded up a piece of paper with an image of Jizu on it for the maid to swallow. She swallowed, then vomited back up the paper, with the needle through the image. You still get slips of paper at the temple to swallow, as you might bathe in water from Lourdes. You can see our packet of them in the photo. 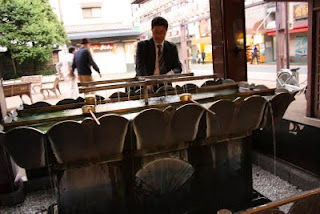 The temple is in a neighborhood, with lots of little shops that appeal to women of certain age (it’s sometimes called the grandmother zone). You cross into the percents, to find a Chouzuya, a place to wash. The stone basin here was sheltered under a small pagoda, with elegantly simple brass ladles. You scoop up some water with the ladle and wash your right hand, then your left, then pour a bit of water in your right hand, rinse your mouth and spit (discretely) onto the ground. The sheer abundance of the water is beautiful. It is reminiscent of the holy water fonts in Catholic churches (though most of those seem parsimonious compared to this flowing water, so rich visually and aurally), and of the places to wash your feet before entering a mosque. 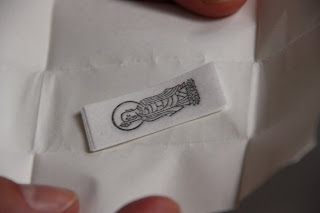 There are several large urns in which to burn incense, you can buy a bundle and drop it in. People would walk up and waft the smoke over themselves, breathing it in, swirling it around their heads.

Hank, Marc and I are off to Japan tomorrow morning. We’ve packed light and I’m carrying the bulk of my reading on my iPad, road testing what we’ll ask the students to do in the fall.