We are back at Daishin-in, where we stayed the first night. The lodgings here are much simpler, more traditional temple lodgings than those at Chi’on-in. No electronic chimes, no big screen television in the lobby (no lobby, for that matter) broadcasting the temple services. There is a beautiful garden, and simple but beautifully presented vegetarian meals for breakfast. I’m going to admit I prefer this to the more modern space any day. 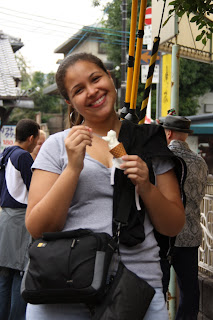 This morning we went to the bamboo forest, an area of Kyoto with several Shinto shrines. We explored one of the shrines here looking at the differences between Buddhist architectures and Shinto spaces. This particular shrine was used by people seeking to be granted love and academic advancement, everything a Bryn Mawr woman might want! It’s hot and steamy here, so the walk up to the ridge top left us soggy, making a stop for ice cream at a small shop a welcome treat. Green tea, kiwi, brown tea and vanilla were the flavors on tap. 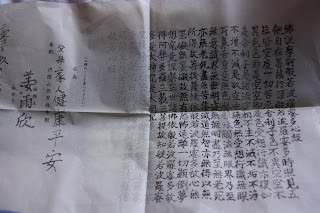 The Moss Temple was next on our agenda, to see its famous gardens and to try our hand at contemplative calligraphy. Hank had written to them in the summer, asking if we might visit. (You can’t visit without a written invitation in return, they check your letter at the gate!) Before touring the garden, we sat in the main hall for a short service, then copied by hand the heart sutra using a traditional ink brush and block ink. It took us about 45 minutes to copy the entire 278 characters in the sutra. (Yuxin’s work in progess is in the photo.)

The garden is an amazing place, laid out by a famous 16th century landscape artist. We walked the garden, attentive to some of the ways to “read” the garden that we had learned from our conversation with Taka at Shuko-in yesterday. What are the embedded clues as to the height should you be looking at this from, how are particular views framed both with objects and in terms of contrast between light areas and darker one, how does the composition change as you walk through the space? I walked the garden path in the reverse direction with Tiffany (who is making the trip with a broken foot and on crutches – the hike up to the small hermit’s hut at the top which the rest of the group was making seemed unwise for her foot and my knee). The garden seemed like a very different space when viewed in the other direction. It’s a quite silent space, people naturally lower their voices and the moss seems to muffle the noises. 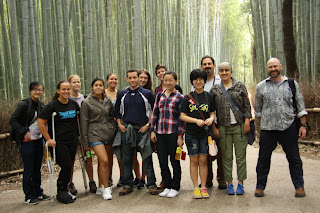 From there we walked to Jizo-in, the very still, very silent place we washed up last year, where we sat and meditated. Even after we were done, people were reluctant to break the silence, and continued to enjoy the stillness of the spot. I had left my pilgrim’s book with the monk down at the entrance, and as we finally gathered ourselves to walk back to the bus, he appeared to be sure I would not forget it. 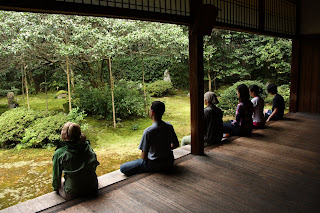 Each temple has its own stamp, and you can get them to stamp your book, then brush in the name of the temple, the main hall and the date of your visit – essentially a proof that you were really there. The stamp for the Moss temple is particularly beautiful. 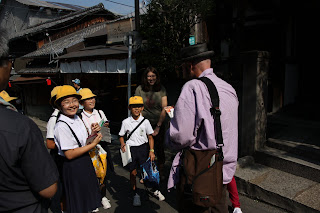 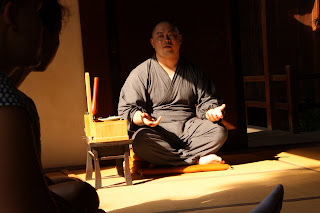 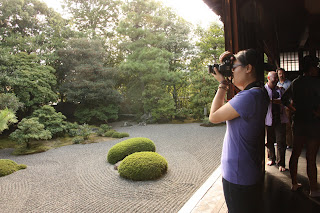 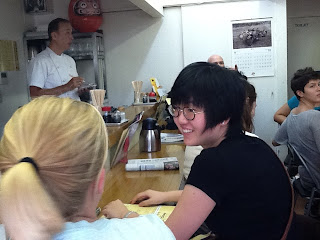 The bus dropped us off the first night in a dark parking lot adjacent to a temple complex. A young lady from the temptle where we were staying came out to fetch us, and led us through a series of narrow lantern lit walks running between cloister walls. It was a relief to walk through the gate of the temple where we were staying, crossing a small bridge through a garden. We piled into the entry way, trading our shoes for slippers.

Our rooms were above the abbot’s garden (the abbot’s quarters are now on the other side of the temple, but the room below us is the tradtiional 10 square foot room that the abbot woudl have occupied). It’s a beautiful dry garden, and I sat there to meditate last night. 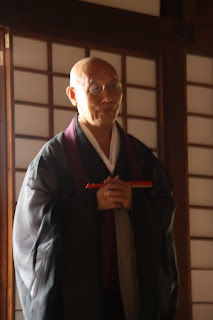 We returned to the Zen temple we visited in the spring, Zuiho’in  where the abbot talked to us about meditation and then led us in a short zazen sitting. We then explored the gardens and saw the tea room (one of the very first tea rooms created). The rock garden at Zuiho’in is as magnificent in many ways as the iconic one at Ryoan-ji, the rocks piled up to represent tall waves.

From Zuiho-in we went to Ryona-ji, to sit in front of what is probably the most famous of the Zen dry gardens (if you have a Mac, the garden wall is one of the choices for a background screen). It’s not a quiet spot, the parking lot is generally packed with buses of school children and tourists, but the garden itself is a very stilling sight.

We had lunch in a tiny restaraunt, 14 seats for the 14 of us. We managed to order, the cook careful be sure that we had a plate each. Udon and donburi (rice bowls topped with meat and egg, the one I had was called “mother and child” — chicken and egg, while Yuxin enjoyed “strangers” — beef and egg. The food was good and quick, and the cook made us a bowl of curry to share. 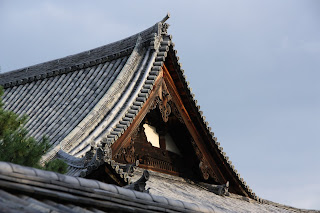 From there it was back to the Daitoko-ji complex, to Daisen-in for another round of conversation about Zen meditation and a chance to sit. We sat zazen for 30 minutes, the abbot complimented us on our ability to sit silent and still for that length of time, most visitors can’t manage that. Those who chose had the opportunity to try the methods of correction employed in training Zen monks, a stick that can be used to strike the back to remind you of the correct position, or held behind you to help find the correct position. It makes a loud noise when used in the former way! Our time there finished with a tour of the rock gardens that surrounds the shrine to the founder, which features a garden with no large rocks at all and two cones of stones amid the raked waves, and another garden with waterfalls of stones and 100 placed rocks. We stopped for a cup of matcha (whished green tea) and sweet cinnamon cookies.

Now we are for dinner and a bath. 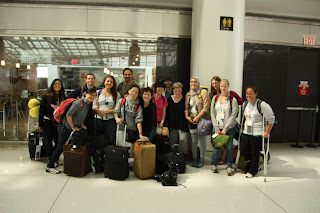 We have arrived in Kyoto, going from modern Kansai to a temple lodging in Kyoto. Arrving after the temple is usually closed, we wound our way through the precints, in the dark, past one immaculate rock garden. We’re taking turns negotating the baths – after the long flight the thought of soaking in all that hot water was more appealing to everyone than tea and a sweet snack!

The group ready to depart from JFK.