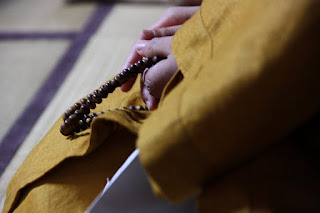 For almost a thousand years, Mount Koya was an entirely male enclave. Until the end of the 19th century, women were stopped at the gates. Still, many of them made the journey, to be close to sons who had become monks, and to the sacred sites. A number of women’s shelters were built at the edges of the precincts. Only one remains standing today. The shelters were linked by a path that is still extant and that entirely encircles Koya-san. Yesterday morning, after we broke silence, I walked up to the remaining women’s shelter and then headed down the path. I was immediately struck by how narrow it was, roughly a foot wide, and how it clung to the side of the mountain. It was not a place for a leisurely stroll. This is how it feels to be marginalized, to be reminded at every step that your presence here is precarious at best. 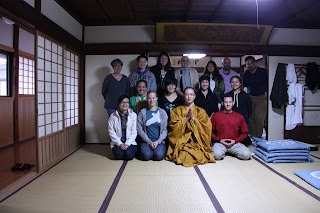 Hideo, the young abbot who has instructed in meditation while we are here told us that when he tired of his studies, he would head out on the women’s trail until he could put Koya behind him. I would agree that you very quckly find that the town vanishes and you are walking a wilderness trail.

In the afternoon we toured the Reiokan museum as a group. There were a set of 12th century silk paintings of Kobo Daishi on display, but was struck most of us were the wooden images of the four kings in the “old gallery.” They are incredibly lifelike, and quite daunting in appearance. It is easy to imagine how terrifying they might have appeared in a dark temple lit only by candles and oil lamps. Several of the students headed out to see the women’s shelter, while the rest of the group headed to the head temple for the Shingon sect.

This morning began with a final conversation with Hideo, thinking a little bit about how to embed the practice of meditation in everyday life, a bit about what else we might read when we return home, particularly about walking meditations (as opposed to the sitting meditations that we have done here). We had an interesting conversation about the concept of “nin” (prompted in part by the large character “nin” painted on the scroll in the niche of the room we were meeting in.) It means self-control, particularly of the emotions. And a bit like the idea of Ignation “indifference” it has the sense not of banishing emotion, but of controling the external expression of the emotions.

The rest of the day was a long travel day in the rain – 10 hours – taking us down the funicular from Koya to three trains, a ferry ride and finally onto a bus for the hour and half ride up from Tokushima port to Kamikatsu up in the mountains. Dinner was delight and we are enjoying listening to the mountain river that runs past the retreat center we are staying in. 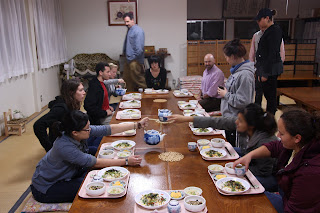