I am writing this on the front steps of Shojoshin-in, the temple where we are staying. The sun is warm, if fading fast, and I’m waiting for the young monk to come out and ring the large bell to signal that the monastery gates are closed for the night. 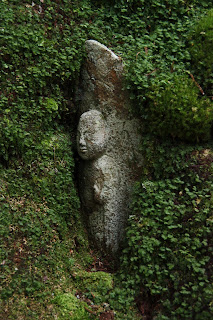 We’ve been thinking not only about the way physical structures enclose, encourage and facilitate silence, but also about the ways in which other practices foster stillness, focus, attention and… silence. One practice is having a structure for the day, in Christian monastic circles this might be called the ordo — the daily schedule. Here the day begins with the morning service, dedicated to the sun deity Daishi, at 6:30. We have an ordo for the group as well, going to breakfast together after the morning service, keeping silence until 9 am, doing two periods of meditation in the morning and meeting to walk and study in the afternoon. The ordo lets us know when to talk, and when not. Bells are one way to signal times in an ordo, and you can hear them doing their work in Koyasan. 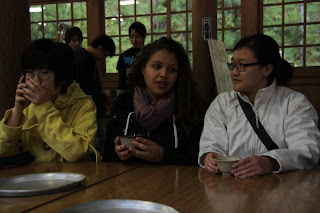 Yesterday we walked twice up to Okonuin, the temple complex at the top of the hill here where Kobo Daishi is entombed, in eternal meditation. The first time we took a lingering walk up, exploring the enormous graveyard that lines the path up the mountain. We noticed many images of Jizo tucked into trees, including the one in the photo that has grown into the tree. The temple is silent on one side, not on the other and while in the summer we found that visitors seemed to utterly ignore the request, this time as you walked around to the back (which faces Kobo Daishi’s tomb), silence fell. We finished with tea at the pilgrims’ shelter just below the main temple, made over a fire that has been burning 1000 years.

After dinner we walked up the path again, our way lit by stone lanterns (and overhead lights!) to see the Mando-e, a ceremony of lights, which occurs only once a year. Brilliantly robed priests processed across the bridge to the temple of the lanterns, led by two men pounding the ground with iron staffs. The main celebrant (so elderly that he had to be helped up the steps of the temple) is shielded by a red umbrella. The ceremony began with two monks sitting at altars to the right and left of the main sanctuary, alternately ringing bells, then furiously fanning the flames of two fires, stirring up the fire to ever higher heights. They were burning prayers sticks, a central rite in the Shingon sect which has its headquarters here. The embers rising up through the flue matched the color of the priests’ robes. 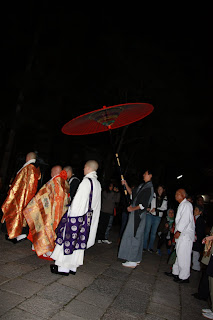 We walked back through the graveyard for the fourth time and found baths and futons a welcome sight.